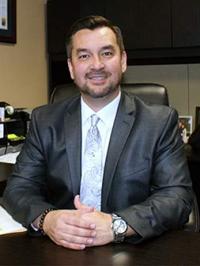 Orange County Clerk-Recorder Hugh Nguyen was born in Vietnam in 1967. As a child, he was told by his mother that his father was an American soldier who was killed in action while serving his country. This year, after an almost 50-year search and a DNA submission to ancestry.com, Hugh miraculously found his father who is very much alive and resides in Tennessee.  Hugh was brought to America at the age of seven by his grandparents and his aunt who raised him. His journey to America began in 1975 aboard the USS Midway which took him from the Philippines to Guam and then to El Toro Air Base, ending up at Camp Pendleton in California. Eventually, Hugh moved to El Centro and finally to Orange County in 1979. He graduated from Saddleback High School, attended Santa Ana College, and completed Orange County’s Management Academy Program at Chapman University.

In June 2014, Hugh was elected to his first four year term of office. Upon taking the oath of office, Hugh became the first Vietnamese American ever elected county-wide to the position of Clerk-Recorder and the first Vietnamese American elected to the office of County Clerk-Recorder in the nation. On June 5, 2018, Hugh was overwhelmingly re-elected to another four-year term and will serve through 2022.

In 1993, Hugh was hired by the late County Clerk Gary Granville. During his first year at the County Clerk’s office, he worked in customer service for marriage licensing, fictitious business names, notary registration, and environmental impact report filings. In 1998, Mr. Granville promoted Hugh to the position of Chief Deputy Recorder in which he served through 2006. From 2006 until his appointment to the position of Clerk-Recorder, Hugh was the Assistant Clerk of the Board expanding his management, budget, HR, and purchasing expertise while gaining valuable experience in dealing with the Board of Supervisors and county operations. Hugh has worked for the County of Orange for more than two decades, of which 17 years were at the Clerk-Recorder’s Department.

Hugh was named one of Orange County’s 2015 100 Most Influential by The Orange County Register for his efforts in making his department’s services more accessible to working families. The annual 100 Most Influential list includes individuals who have influenced business, culture, education, food, giving, government, health, inspiration, science and sports. Under his leadership, his department has received multiple CSAC and NACo Awards for the innovations that Hugh ushered in.

Hugh has been a resident of Orange County since 1979  and currently lives with his wife and children in the City of Santa Ana.

Hugh’s Goals for the Department include:

Hugh’s Accomplishments During his Tenure:

Awards and Recognitions Under Hugh’s Leadership